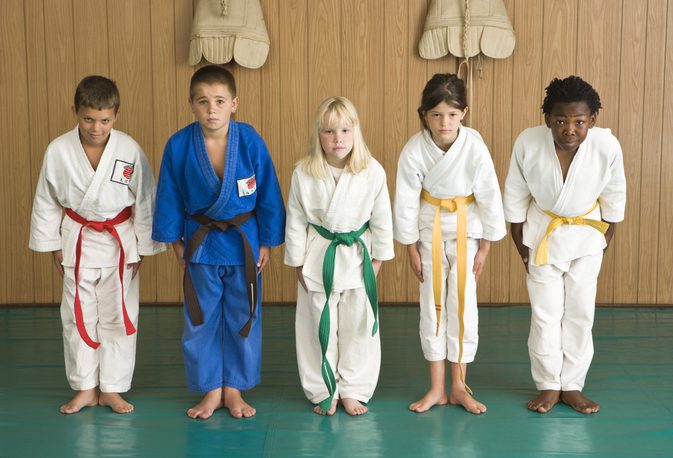 Martial arts are an ancient method of training your mind, body and spirit to act as one. Martial arts practitioners strive for harmony, but also learn effective  self-defense techniques. Children who get involved in martial arts reap many benefits in several areas of life. Most martial arts originated in Asia and include karate, kung fu, jiu jitsu, aikido, tae kwon do, judo and muay Thai.

Fitness is a crucial element to all martial arts classes, especially where children are involved. Warmups with stretches are common, and the movements of the martial art itself often challenge your muscles and cardiovascular system. Martial artists are known for being toned, flexible and physically fit, and your child will be no different.

The ability to defend yourself against an assailant is an empowering feeling. Most martial arts, such as at this school, use self defense as a cornerstone of the entire program. The precise methods will vary from discipline to discipline, but you can be certain that with regular practice, your child will learn to defend himself or herself in a variety of different ways.

Martial arts help instill mental focus in your child, giving her the ability to concentrate on a task and see it through to its conclusion. The discipline that is taught in the dojo in regard to uniforms, customs and techniques often translates into other areas of life, including school and household chores.

Martial arts are all about respect. Punching and kicking are all secondary to the respect that is shown from the moment you walk into a dojo. Children learn to bow to the masters who came before them, and to their current instructors. They also learn to treat other students as they wish to be treated. Quality martial arts instructors, such as at this school, press upon the respect issue regularly and instruct students to practice respect for self, parents, teachers and peers at every opportunity.

A child who is involved in martial arts such as Tae Kwon Do or Karate is generally a child who is confident in herself. Working through a martial art and the belt ranking system gives a child measurable goals to follow that are realistic to attain. The sense of accomplishment a child feels by mastering a new technique or graduating to a new belt follows him everywhere he goes.